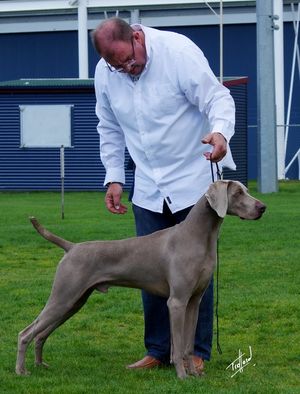 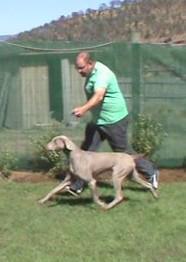 Shooter is full Ghostwind breeding and like all Ghostwind dogs is making his presence felt in and out of the show ring.  We would like to thank Glynis Shields of Rifleman Kennels (New Zealand) for allowing Shooter and litter sister Annie to join us at Ghostwind.
At the tender age of 6 months and 1 day Shooter is awarded his first challenge and Runner Up Best Of Breed at the Victorian Gundog Club in a full line up of males.
Keep your eye out for this stunning youngster who is taking all before him.

RCC/Intermediate In Group - Hobart Royal 2013
Critique from Group 3 Judge Mrs Anne Ingram (IRE)
Intermediate - Weimaraner Another really nice dog from the same kennel with his classic head, good reach of neck, good body and strong hindquarters, what a strong team of dogs this breeder is producing

Shooter is now a Mutli Best In Group Winner and has gained his Australian Championship title with Best Of Breed/Runner Up Best In Group at Launceston Royal 2012.

We have frozen semen from Shooter, please contact Sue for further details.